Panzanella Salad with crusty bread, juicy vine-ripened tomatoes, and the best homemade vinaigrette dressing. Try this bread salad once and it will become an instant favorite. Tomato Panzanella is right up there with our popular Cucumber Tomato Avocado Salad.

Our garden produces so many tomatoes and tons of basil in summer and we love creative and delicious ways to take advantage of them at their peak of freshness before we start freezing batches of Roasted Salsa and Canning Tomatoes. My whole family loves this tomato salad, even my 11-year old son who otherwise doesn’t like tomatoes, but went back for refills.

Watch how to make this Panzanella recipe (and you’ll even learn how to make homemade croutons). There are so many reasons to love this recipe:

Panzanella is a Tuscan Salad that is popular throughout Italy. It is a chopped salad with toasted bread, tomatoes, onions, and fresh basil. The salad is soaked in a simple vinaigrette dressing that makes every bite mouthwatering and delicious.

What is the Best Bread for Panzanella?

A sturdy stale bread works best and is less likely to become soggy from the dressing, which makes this a brilliant way to use up leftover bread. These are the best bread varieties for Panzanella:

How to Make Panzanella Salad

1. Toast the Bread: slice your stale crusty bread into 1-inch pieces. Drizzle with 2 Tbsp olive oil and a pinch of salt. Scatter on a baking sheet and bake at 400˚F for 9-11 minutes then set aside to cool. Note: Edges should be golden brown and fully dried through so the bread doesn’t get soggy.

3. Toss Salad: Place remaining Panzanella salad ingredients into the same mixing bowl you used for the bread. Add the cooled bread. Drizzle on the dressing 15-20 minutes before serving and toss gently to combine. Garnish with more basil.

We love changing up this salad based on what we have on hand. Some of our favorites are:

What to Serve with Panzanella Salad

This salad can be served as a side salad or as a light and satisfying lunch. The addition of toasted bread and mozzarella cheese makes it hearty and satisfying. We love to pair it with these Italian-Inspired Dishes: 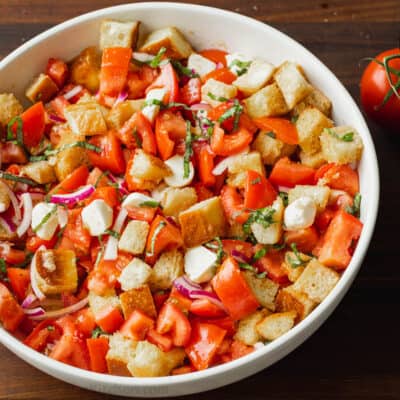 Servings: 6 people as a side salad

For the Tomato Panzanella Salad:

For the Vinaigrette Dressing:

Use sturdy bread like Ciabatta or Sourdough and your croutons will be less likely to get soggy.

* Percent Daily Values are based on a 2000 calorie diet.