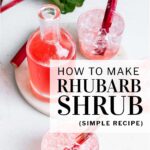 If you have an abundance of rhubarb springing up from your garden, make this rhubarb shrub. This sweet-and-sour drink is easy to make, and perfect for springtime.

What is a shrub?

A shrub is a sweet-and-sour drinking vinegar. To make a shrub, you pour vinegar over fruit and let it stand for a few days. Then, you strain the fruit-infused vinegar and mix it with sugar or another sweetener.

In addition to fruit and vinegar, many shrub makers also add herbs, spices, and, occasionally, vegetables. Sugar remains the sweetener of choice; however, you can sweeten shrubs using other natural sweeteners such as honey, maple syrup, or molasses. This version of rhubarb shrub uses rhubarb, white wine vinegar, and sugar.

Sweetened vinegar-based drinks made with fruit, herbs, and spices have been prized for both their medicinal and culinary value since antiquity. Early Persian texts describe the benefits of sekanjabinat which comes from the words serkeh (vinegar) and anjabin (honey) made using herbs, spices, and fruit.

Later, these honey-sweetened vinegar drinks were adopted in Greece and spread throughout Europe where they were known as oxymels. Oxy refers to vinegar, and mel to honey. Eventually, these medicinal cordials became what we know as shrubs today.

Shrubs and other drinking vinegars were popular in the 17th and 18th centuries before their popularity waned in the early 20th century with the advent of soda counters. Making shrubs offered an easy way to preserve summer fruit well into the cold winter months.

Additionally, vinegar-based drinks were thought to convey medicinal benefits as well such as supporting digestion, easing stomach upset, or soothing the common cold, depending on which fruits and herbs you add to the mix.

This rhubarb shrub is simple and easy to make. You’ll need rhubarb, vinegar, and a sweetener. To this basic mix, you can also add fresh herbs such as mint or spices such as vanilla and cardamom.

As with many old-world recipes, shrubs are easy to make. You’ll start by soaking the rhubarb in vinegar, then strain the infused vinegar before mixing it with sugar. Next, heat the sugar and vinegar together in a saucepan until it forms a fine syrup. Bottle and store.

With its pretty pink color and sweet-and-sour flavor, this simple shrub is a delicious and simple way to use up all the rhubarb in your garden. Mint, cardamom, and ginger are all nice additions to the basic recipe, if you’d like to liven it up a bit.

Swap honey for sugar to make a rhubarb oxymel instead.

Add strawberries to the rhubarb and make a strawberry-rhubarb shrub.

Add vanilla bean and green cardamom to the vinegar at the same time you add the rhubarb. The spices will give the shrub a fragrant, floral quality that works well with rhubarb.

How do I store a shrub?

Shrubs are high in acid and sugar which helps preserve them. Traditionally, shrubs would be stored at room temperature for 6 months or longer in a cupboard away from direct light and heat. However, most people store their shrubs in the fridge.

Can I omit the sugar?

Shrubs are made with equal parts sugar and vinegar. If you’re avoiding sugar, you can simply make a rhubarb-infused vinegar instead, but it won’t be sweet.

Spoon a tablespoon or two of the rhubarb shrub into a glass, and fill it with mineral water. You can also serve it with alcohol such as rum or vodka.

Try these other recipes next

Travel Agent Near Me